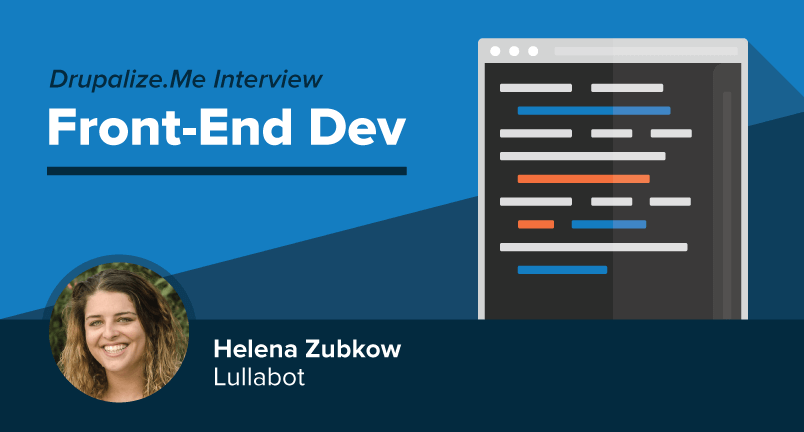 Interested in learning how to become a Drupal themer and front-end developer, too? Check out our role-based learning pathway: Work with Drupal Themes and Front-End.

Helena is a front-end developer at Lullabot, based in Orlando, Florida.

Where to find Helena

How do you define the front-end developer role?

Front-end developers use a plethora of coding languages and frameworks to transplant static designs onto complex back-end systems to create a beautiful, living website. In a way, we’re the glue between the art and the science, so we need to be skilled at both. This makes being a front-end developer both an interesting and challenging role.

For me, that’s why it’s such a fun and rewarding career; it takes multiple facets of the mind to do it well. Even though we get designs from the designers, there are a lot of small technical enhancements that can be the difference between “beautiful to look at” and “enjoyable to use”, which require some panache. It’s technologically simple and adherent to the design to make a link change from blue to red, but creatively placing a subtle transition is the difference between ‘working’ and ‘working beautifully’.

How does being a front-end developer relate to being a Drupal themer and vice versa?

Being a Drupal themer is one of the things that I do while I’m being a front-end developer, but it’s only a part of the whole. When I hear “Drupal Themer”, to me that means simply skinning a Drupal site that an engineer has built by laying CSS or Sass on top of it, but there’s a lot more to front-end development than that. As a front-end developer, I write jQuery scripts that change the way the site interacts with users, I do a decent amount of site building, I install and configure modules, and I take larger concepts such as performance and accessibility into account. Put simply, ‘theming’ mainly refers to decorating what’s been built, while front-end development requires that you take part in the building process.

What do you currently do for work? What does your daily routine and work process look like? What kind of tasks do you do on a daily basis?

Currently I work with Syfy as part of the Blastr team. My daily routine is pretty straightforward. I wake up and review my current tickets on GitHub to see what’s been merged, and how current PRs are performing in their test environments. Then I go over to JIRA to see what I’ve done, if anything has come back from QA, and what still needs to be done. If I find anything on the site that needs improvement, I’ll file a ticket for myself or someone else to fix it. I report these findings on scrum, update the team on the status of my tickets, and listen to what everyone else is working on, and then work my way through the day’s priorities.

As a front-end developer, I do a little bit of almost everything. On the technical side, I help make technical game plans from wireframes, site build, and theme what we build. When what we build breaks, I help troubleshoot to fix the problem. I’m also a web accessibility specialist, so I offer guidance on that topic to my peers and clients and work to configure elements so that they’ll work well with assistive technologies and alternative use scenarios.

On the social side, I consult and collaborate with clients about exciting potential features, explain to our clients how things work and why, and lighten the mood for my coworkers when tensions run high. Working as a front-end developer is never mundane because you have a lot of hats to wear over the course of a project.

My strongest skill is moxie. Whether it’s picking apart a tricky bug carefully over the course of a few hours, responding to someone who is irate or unreasonable with a smile and calm rationality, or working diligently to learn something new long after frustration has set in, this serves me well for both the technical and social aspects of this career. I largely credit my previous career as a preschool teacher for this skill. My ‘clients’ were a horde of thirty 3- and 4-year olds. I’ve been tempered in toddlers; my moxie is iron.

I started building websites when I was eleven years old to proclaim my love for N*Sync and Spider-Man to the world. My other hobby since childhood has been studying medical science. I got my degree in Technology Management with a minor in Psychology with the intent to produce assistive technology (AT) software to make communication easier for individuals with developmental disabilities, primarily coding in Java and C++.

While working on my AT software, I began building websites professionally to keep the money flowing. Since I had the skills and enjoyed doing it, it seemed like a good way to produce income. As time progressed, my interests in web development and AT merged into one as I realized that I could do more good on a larger scale by working to integrate accessibility into the front-end of commercial websites than I could with independent software. I’ve focused on front-end development since, and it’s been a great career choice. I love what I do!

What is most challenging about being a front-end developer/Drupal themer?

Being a front-end developer can be challenging because people don’t always understand how complex the work that we do is. Clients will ask, “Can we just have this one small feature/change?” without fully understanding that a browser isn’t like Photoshop. Something that takes 30 seconds to change on a comp might take quite a few hours or days to change in the code.

Another tricky part is that there are almost always a few ways to do the same thing, and it can be hard deciding which way to implement is the ‘best’ way without being able to see the future.

If you were starting out as a front-end developer/Drupal themer all over again, is there anything you would do differently?

I would have learned Drupal sooner. Once I learned how to build with Drupal I never glanced back. I had been coding websites by hand for a long time when I learned about Drupal, and now I’m sorry that I missed out on the powerful tools and rich community for all of that time. I wish I had been in this community from the beginning.

What advice do you have for someone just starting out as a front-end developer/Drupal themer?

Make work-life balance a priority. Coding can be easy to get absorbed into because it’s engaging and mentally stimulating, and the field can produce serious workaholism. You can easily sit down for five minutes and realize that it’s actually been twelve hours and there’s a Dorito in your hair, but putting your sanity and health first will make you better at your job. Eight hours of thoughtful, well-rested work will produce more high quality code than seventeen hours of caffeine-fueled zombie typing ever will. Go outside. Pet your dog. Hang out with your friends and family. Eat something fresh. Sleep. Then get back online and kick some ass.