A Simple Drupal 7 to Drupal 8 Migration 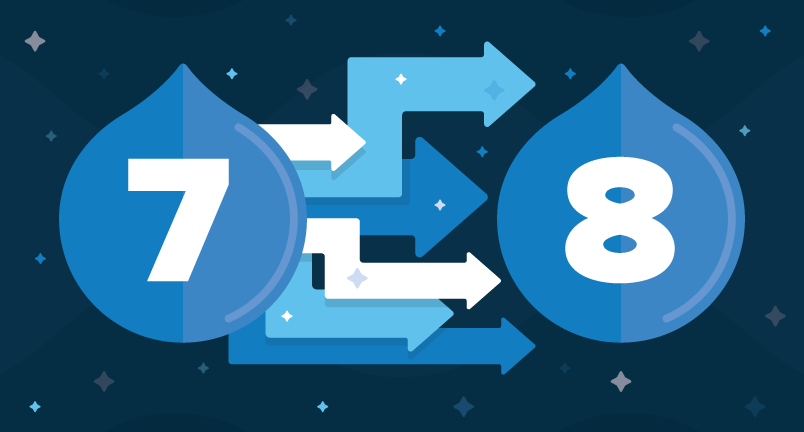 It probably won't be much of a surprise to hear that there's a lot of excitement around these parts about Drupal 8. With the release candidates coming out recently and November 19, 2015 announced as the official release date, we've been putting a lot of work into our curriculum and recording new tutorials.

The developer in me has been itching to give it a try on a "real" project. The Drupalize.Me site itself is pretty complex: e-commerce (with recurring billing), video delivery, and piles and piles of content. Suffice it to say it's not a prime candidate for migration right now. Our blog however, is definitely a better prospect. Justin has a great new design for us. Amber has mentioned how much she'd like the new Drupal 8 authoring tools. The blog is relatively straight-forward which makes it a great way for our whole team to start using Drupal 8. So, as we start to think about upgrading our blog the first thing we're going to have to think about is data migration. Let's take a look at Migrate module, that's now part of Drupal core, and see how much work we might have ahead of ourselves.

My first stop on this adventure was to Drupal.org to check out the Migrate module's documentation. There are now four migration-related modules to know about:

The next resource I visited was the Executing a Drupal 6/7 to Drupal 8 upgrade handbook page on Drupal.org. As this page points out, the bare bones of what you need to test a migration are:

Once you have these basics in place you can proceed with a migration from either the UI or using Drush.

Drupal 8 is still in the release candidate phase (as of the time of writing this post), and there are a list of known issues with the Drupal-Drupal migrate path as well that will likely persist into 8.0.0. Probably the biggest issue for this particular migration is that Views are not yet being migrated automatically. The other issue I ran into was with the input formats on our current site. One of our input formats depends on a custom module that hasn't been ported to Drupal 8 yet.

Most problems you'll run into attempting a migration right now will fall into one of these two categories:

Before actually starting a migration, it's probably a good idea to identify the contributed modules you're using on your site and see which ones have Drupal 8 versions already available to test. As for the migration paths, this is one place the Migrate UI comes in really handy, as you can see in this screenshot: 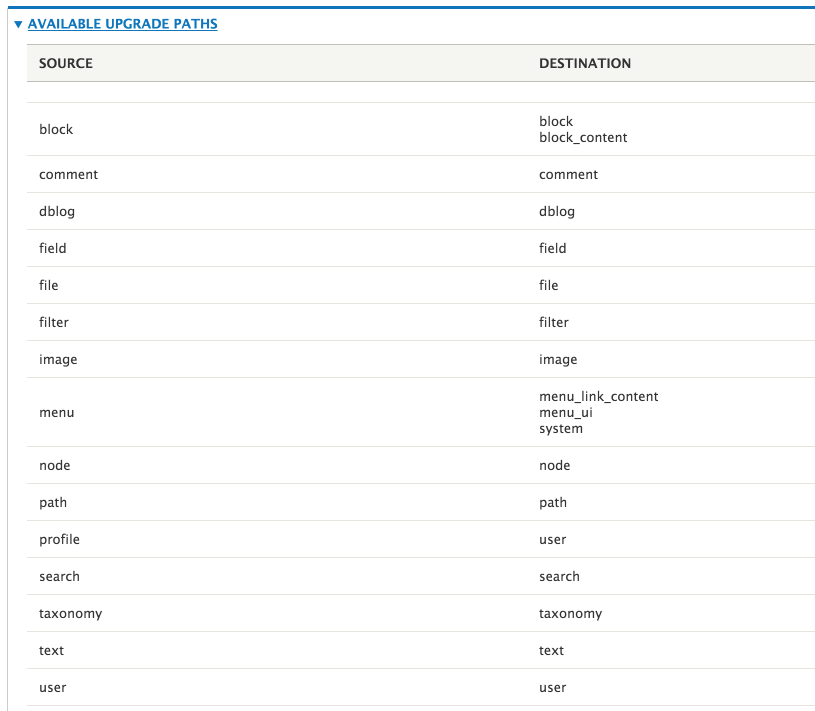 To get started, on my local Drupal 8 site I've enabled the Migrate, Migrate Drupal and Drupal Upgrade modules. With these modules enabled, we can now visit the upgrade form (at the path /upgrade). Here you'll be presented with another warning about not using your live site as the data source, as well as some other reminders about enabling modules and database access.

Next you'll be asked to specify the credentials and location of your source database and files. After entering that information you'll be presented with a list available and missing migration paths. This list should give you a pretty good indication of what might be missing, and how much work you'll need to do in order to get your new Drupal 8 site really ready for a migration.

If you proceed with a migration here from the UI, migrate will trigger an import of all of the available migrations. On my first attempt with a migration going this route I ran into a few issues. You can imagine that migrating all of the users, content and configuration for a site of this size takes a bit of time. Indeed, the first attempt lead to a batch failure during the user import process. I was (eventually) able to complete the migration by rerunning it from the web UI a handful of times.

Improve the migration process with Drush

Since the documentation goes out of the way to suggest using Drush to run migrations, I figured that was also worth a shot. The Migrate Tools module (bundled as part of Migrate Plus) provides several helpful Drush commands:

When I run migrate-status, I get a list of all of the available migrations, status, total number of records, number imported and unprocessed and information about the last import. We can use migrate-import to run one particular migration. Using Drush to selectively run the migrations I needed for our blog dramatically sped up the total migration time for this particular site. Going forward I'll be using Drush, as the Drupal.org documentation recommends, rather than the UI to trigger migrations.

Once you've identified the migrations you're interested in, you can create a migrate manifest YAML file and use that to run a particular set of migrations. Documentation on drupal.org can help walk through the details of creating this manifest file. Once a manifest has been created the migrate-manifest command will run a migration for each item specified in the file. 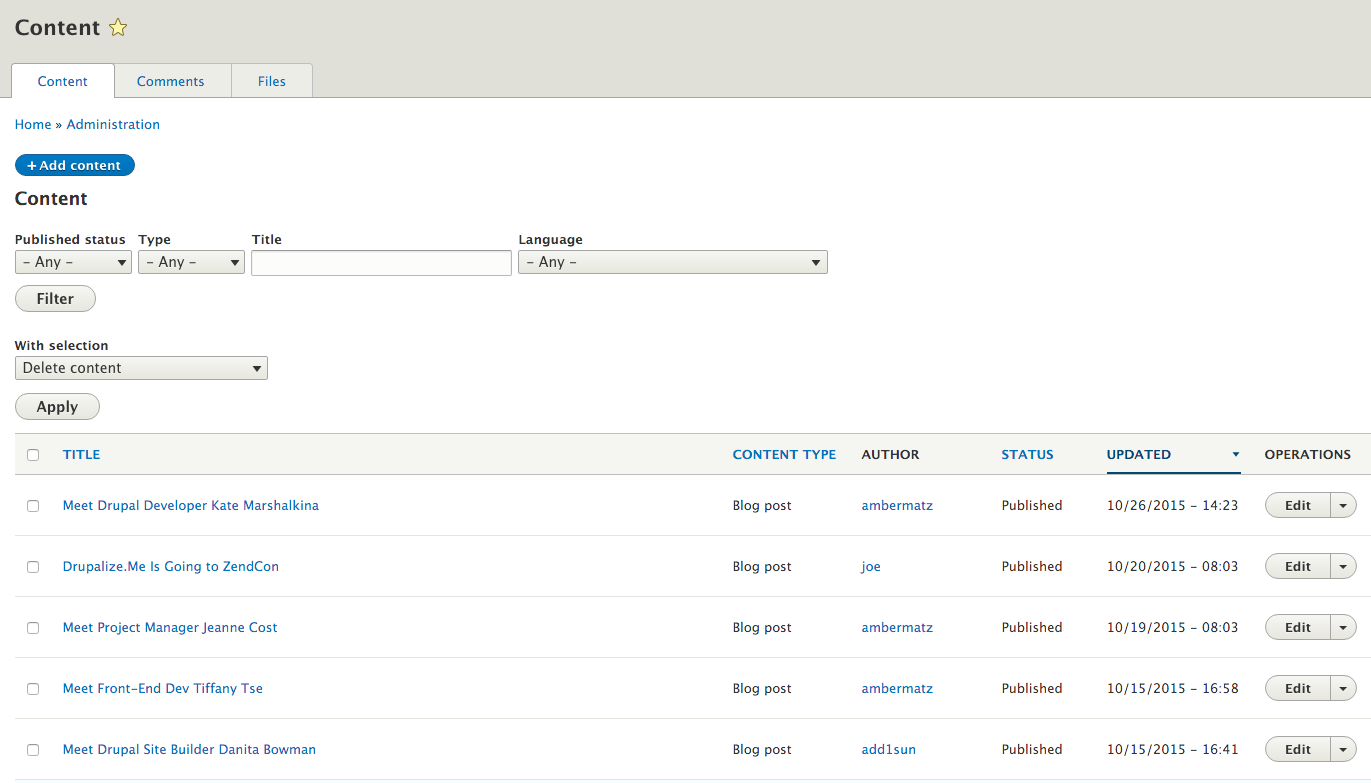 I've been really impressed by how far along, and how polished the Drupal 8 migration process is already. There are definitely a couple of contribute modules we'll need to evaluate in order to have a fully working Drupal 8 blog, but I was able to migrate the bulk of our content without writing a single line of code.

In retrospect, as we continue to evaluate moving our blog to a Drupal 8 site I now need to go back and clean up the source site I use with Migrate. If we're going to split the blog off into a separate Drupal 8 site we won't need all of the content types or much of the other site configuration from the main Drupalize Me site. This will eliminate cruft from our new blog, and speed up the actual migration process itself. We'll also need to check in on a couple of key contributed modules, and rebuild a handful of Views (since they do not have a working migration path right now).

With the help of Migrate, the process of moving our blog to Drupal 8 is a lot less painful than I would have anticipated. Kudos to all the hard work that's gone into the Migrate collection of modules! With the official release of Drupal 8 right around the corner, maybe it's time to try migrating your site?

Migrate Manifest is being pulled out of Migrate Plus. You don't need a manifest to run a migration, you can do it without that. For anyone who wants to use a manifest, there is a new project for that at https://www.drupal.org/project/migrate_manifest.

Thank you very much. It helps a lot to understand the migration process of Drupal 8. Keep posting such great experiences.

Thanks for the information, really appreciate it.

This worked pretty well overall. Most content was moved successfully from Drupal7 to Drupal8.

One problem though: it seems the upgrade lost the associations between a linked file or image and the node. Haven't been able to figure that out and definitely don't want to do by hand.

Migrating files probably depends a bit on the particular configuration of your site, but there are two things that come to mind that might be worth looking in to.

If you're using entity references to point to files, you probably want to keep an eye on https://www.drupal.org/node/2611066 which includes a patch where that upgrade path is being worked on.

If you're working with private files, there's a patch to test for that upgrade path here: https://www.drupal.org/node/2505283.

Hopefully one of these will help you out. Cheers!

You should definitely not attempt migrations on a live site. You should create a copy of your live site, along with a drupal 8 site, to perform your migrations. We will have a tutorial going in to more detail soon.

You can also give a try to this automated CMS migration service: https://cms2cms.com/
Hope this will help.

Hi there, I want to upgrate my drupal 7 site to drupal 8.
But I'm so confuse how can i start how can i figure out this.
Actually I'm a blind web developer working with an organisation called Blind Help Project [BHP] and our ame is to help out the visually impaired cummunity all over the world in technology.
So please can you help me and tell me the easyest method to perform this huge migration?
Looking forward to your response.
Regards!

Probably the best place to get started with a migration is our Upgrade to Drupal 8 topic page. This will help point you towards tutorials on our site (and elsewhere) with plenty of information to help you plan and execute a Drupal 7 to Drupal 8 migration.

I migrated using modules via web, super migrated content type, taxonomy, etc... but no import o uploading images from s3 in Drupal 7 to s3fs in Drupal 8 configurated. How do that?
Somebody know about that.
Thanks

If you're moving from one s3 Drupal module to another while you upgrade versions you're likely going to have to write a custom migration plugin to support your needs. This tutorial should help you get started: https://drupalize.me/tutorial/write-custom-migration?p=2578