Applying Lessons from the User Guide to Drupal Documentation

Before reading this, check out these other posts:

After reading all of these I have lots of thoughts and feelings, and I don't yet know what I think the best path forward is. But I'm happy to see this conversation being highlighted and the continued discussion of how we can make Drupal's documentation even better. To that end, I think we can look to the User Guide project as an example we can learn from.

Learn from past successes

I want to point to the Drupal 8 User Guide project as an example of what can be accomplished through a documentation initiative. It wasn't ever an "official" initiative, but there was a lot of community involvement and excitement around it nonetheless, as well as more coordination and collective effort towards a goal than we typically see with regards to work on Drupal's documentation. While this particular guide only covers one aspect of Drupal, I believe it can serve as a good example for possible future documentation initiatives.

You can get some history of how this project was started, and how it evolved over time, by watching these two presentations:

We set out to solve a bunch of existing issues:

Things we learned that could be applied elsewhere:

Start with a plan

Once we knew we wanted to write the guide, and felt like we had some buy-in from the community, the first thing we did was make a plan. Jennifer and I met in person, and drafted an initial outline covering exactly what we felt the guide should contain. Then we shared that for feedback. Having this outline allowed us to know what was in scope, track the progress of the initiative, and get other people involved in a meaningful way (running a documentation sprint is a lot easier if you know what you want people to write).

In addition to the outline, we also defined a process that every page in the guide would go through. 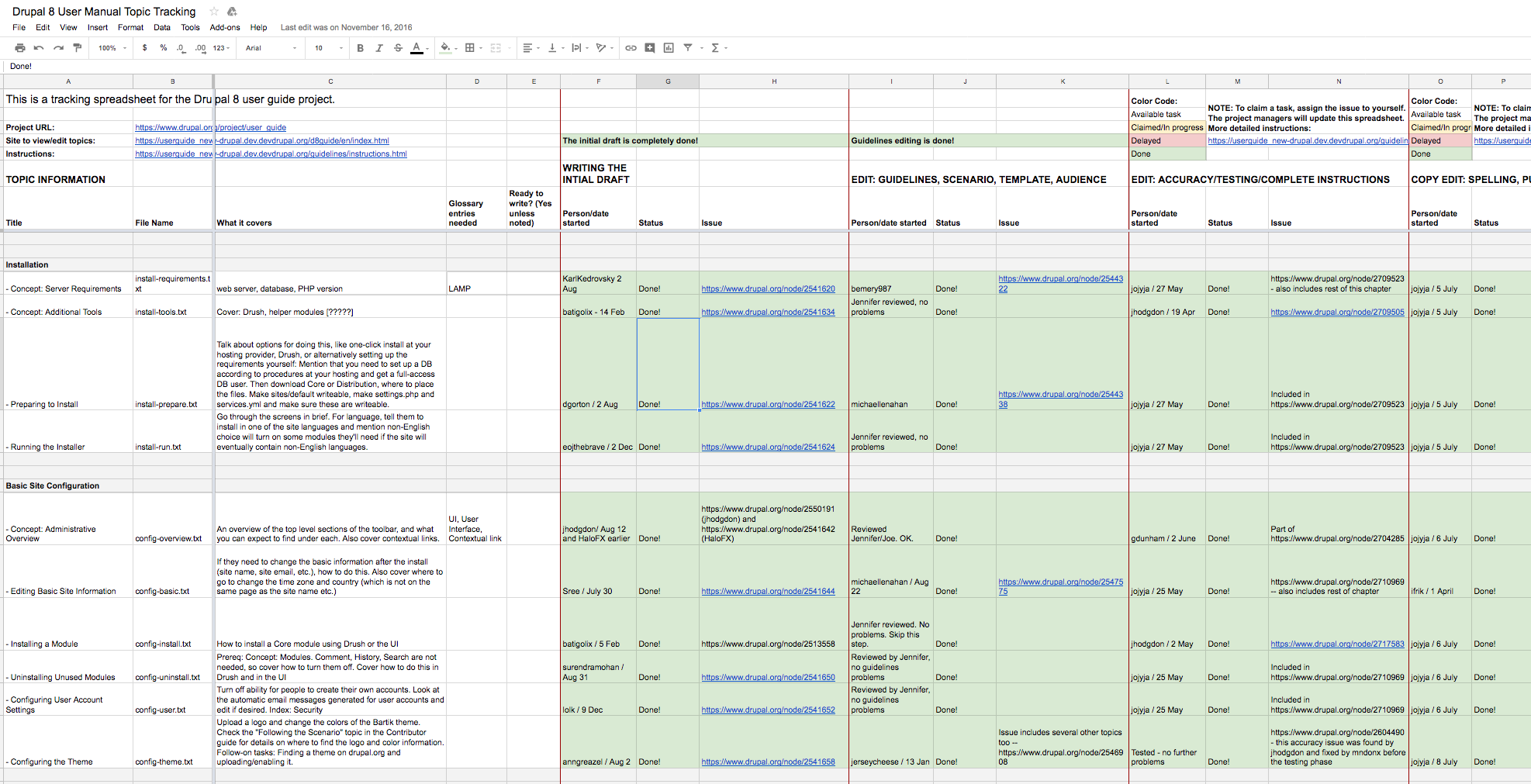 Again, this allowed us to track progress, and helped with recruiting people because we had clearly-defined tasks for people to work on. We could also define that certain steps (copy editing, publication) could only be undertaken by specific people in order to allow for consistent quality control.

While maybe not as friendly for someone who just wants to make a drive-by edit to a documentation page, using Git as the canonical source for the content of the guide has proven extremely valuable.

It does raise the barrier to entry for contribution. However, in my experience I generally feel the trade-offs are worth it.

A nice side effect of the use of version control in this case is that we can give people a commit credit for the work they've done. For better or worse, this is an important aspect of the contribution process. Writing documentation is often a thankless task, and we want to help elevate those that are contributing.

In addition to commit credits we also maintain an ATTRIBUTIONS.txt file for the guide, and individual attributions with each page.

Limit scope and define your audience

The user guide has a defined scope and audience.

This guide was written mainly for people with minimal knowledge of the Drupal content management system. The topics will help them become skilled at installing, administering, site building, and/or maintaining the content of a Drupal-based website.

This allowed us to make critical decisions about what to include, what was too much, and where we maybe needed more information.

Additionally, writing documentation is one thing. Keeping it up-to-date is a whole other beast. Knowing the scope of what your documentation covers makes this easier.

Keeping the scope of what the guide covers allowed us to, well... finish the guide.

Oversight and governance are important

It's hard to write world-class documentation by committee without good governance...

While the idea of a free-for-all wiki where anyone can come along and help with updates to the documentation certainly has its merits, it is also a promoter of sprawl and can lead to vastly inconsistent quality. In the end Jennifer and I didn't write all that much of the content. Instead, we helped others figure out where and how they could get involved, ensured that processes were followed by acting as gatekeepers, and worked hard to identify issues and adopt our plan in order to address them. I believe this allowed the guide to be completed.

Going forward we can help to identify areas that need improvement, facilitate translation teams who are doing the hard work of translating the content, and throughout all of this ensure consistent quality. But this only works because from the beginning it was made clear that this isn't a free-for-all, and there is a process.

The combination of a clear definition of scope and governance gives us the authority to say, "Thanks, but no thanks." With the existing wiki-like documentation there's no clear authority, which I believe leads to duplication, unnecessary content, and people feeling like they can't update or fix content written by someone else for fear of breaking some unwritten rules. Anyone wanting to improve things by deleting or re-writing is left to contend with the rebuttal from the author and no real recourse other than to decide they want to get into a battle or back off and leave it as-is. Clear scope and governance help solve these issues.

Because we have a defined scope, and a set of strict formatting guidelines we are able to automate the process of creating screenshots for the guide. Almost every page in the guide contains multiple screenshots. Keeping those up-to-date with changes to Drupal core would be arduous -- which really means it wouldn't get done. Having an automated way to generate the majority of these ensures that when a new minor version of Drupal 8 is released we can just update all the screenshots. It also means we can generate screenshots for translated versions of the guide that show the Drupal UI with alternative languages installed.

Without being able to do this I'm not sure we would have decided to add screenshots to the whole guide. Its impossible to understate how much harder it is to maintain things like images and videos in comparison to text.

And, as a side-effect, this process serves as a sort of functional test suite for the guide. It often catches changes in Drupal core that require us to upgrade the step-by-step instructions in the guide.

Be prepared to explain again, and again, why we're taking this approach to writing documentation. After many years of wiki-style free-for-all on Drupal.org there are a lot of people who push back against imposing more oversight and control. Taking the time to explain the benefits of an approach like this and helping people to see how they can still contribute can be tedious, but it's worth it.

Additionally, Drupalize.Me is currently working on creating videos to complement the content of the user guide -- a task that we couldn't possibly take on without all of the above structures being in place. You can read more about the effort in Adding Free Videos to the Drupal 8 User Guide.

I hope that we can use some of the experience gained writing the Drupal 8 User Guide to help inform future decisions about how we create and maintain documentation for all of Drupal. Including:

That, and of course, empower more people to get involved in creating high-quality documentation that matches people's expectations and makes Drupal look good.

I would love to hear your thoughts about adopting lessons learned from the user guide either in the comments here, or on one of the posts linked above.

Please include an initial section regarding the following in simple terms: Where to place what. If you want to build a test site on your computer, then do this… . How to move the test site to a hosted site.
When attempting to do this about 5 years ago with Drupal 7 it became a nightmare because the preferred host assumed I had the knowledge to move it to the host server, but I didn't nor could I find instructions on how to do that. We are using WP which I hate with a passion and want to go back to Drupal but unless I can set up a development site locally and a public access site on a host server and be able to transfer between then I have to defer to the WP "experts" in our non-profit group.

Thanks for this writing up. I think the Drupal 8 user's guides was a big improvement.

What do you think about having the goal of "Quick Start" guide for Drupal that is limited to 5~10 minute read? Of course this would have to be a very opinionated guide that only presents 1 way of installing Drupal.

With other projects I have tried to learn I have really appreciated these.

This may actually require that we *first* have an local development environment that has an "official" status to make guide like this possible.

I like this idea. And think it would work well if we're really intentional about who the audience is. And that the goal isn't to teach someone Drupal, but rather give them a quick on-ramp they can use as a starting point for future learning.

I think something like this is a great way to help existing developers who are already pretty familiar with either Drupal, or at least similar projects, to get something installed so they can play around quickly.

It's probably also worth keeping in mind the scope of Drupal. It's huge! What is the end goal of a quick start guide like this? Most the quick starts that I'm familiar with are a sort of "Hello world" for the framework in question. And it's realistic to get the code base downloaded, installed, running, and write a few dozen lines of "Hello world" code. Resulting in a success, and a better understanding of what you're getting into with that framework. What does "Hello world" look like for Drupal developer? Or a Drupal site administrator?

Thanks for this. It's great to see that there's thought around on-boarding novice Drupalistas.

It would also be great to think about learning from scratch in light of Drupal's pretty aggressive release cycle. I'm finding that as I'm learning about a particular concept, Drupal has since updated to a new version. I started learning about how Drupal works with a fresh install of 8.5.6 and we're now at 8.6.1. I won't know if what I know about Drupal now will still be worth the time I've spent learning until I start a new project with the latest version.