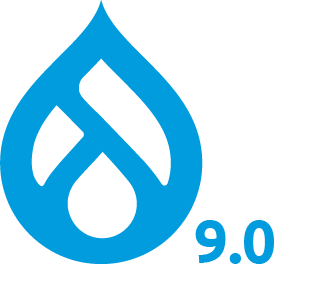 On June 3, 2020, Drupal 9.0.0 was released! This is a major version update for Drupal, but the most straightforward update in Drupal's history.

As major version updates in the past have been quite disruptive in bringing new features and APIs, you might be wondering how this update impacts your site and your Drupal learning journey. Will Drupalize.Me Drupal 8 tutorials apply to Drupal 9 sites? Will you have to learn a totally new system with Drupal 9?

Thankfully, there is good news about both those questions. The short answer to the first question is "Yes!" -- the vast majority of our Drupal 8 tutorials will apply to Drupal 9 sites. For the second question, the answer is "No!", you won't have to learn a new system. The exceptions to the question of tutorial compatibility are tutorials which feature APIs that have been removed in Drupal 9, like in SimpleTest for Automated Testing (which we have noted). Also, some contributed modules have updates that we are currently reviewing. They appear in our Search API and Solr tutorial series.

We've put together some resources to get you up to speed with Drupal 9, starting with our Guide to Drupal 9.

What's the deal with Drupal 9?

In this short video, we explain how our Drupal 8 tutorials are compatible with Drupal 9 sites because of the way that Drupal 9 was built inside of Drupal 8.

While there's no one-size-fits-all process for upgrading to Drupal 9, by the end of this tutorial you should be able to explain the major differences between Drupal 8 and 9, audit your existing Drupal 8 projects for Drupal 9 readiness, estimate the level of effort involved, and start the process of upgrading.

Learn about a key concept in understanding the difference between Drupal 8 and Drupal 9: deprecated code:

What Is Deprecated Code?

Deprecated code is any code flagged for future removal, but which has not yet been removed to ensure that existing code which relies on the to-be-removed code will continue to work. When an API, or feature, becomes deprecated it's a warning to all developers that at some point in the future this thing they are relying on will not exist, and they'll need to update their custom code to a new approach. Preferably before the existing one gets removed.

In this tutorial well:

On the blog, we've posted a couple of tutorials to help you check your site for Drupal 9 readiness.

Upgrade status generates a report that serves as a sort of checklist to help you determine whether or not your site is ready to be upgraded to Drupal 9. It packs a lot of useful information into a single report. It's worth taking the time to install it on a copy of your Drupal 8 site and seeing what it has to say.

Drupal check, and Drupal rector, are two useful command line tools you can use to help jump start the process of updating your Drupal 8 code to ensure it's compatible with Drupal 9. This post includes some notes about the process I went through while testing them out on some of the Drupalize.Me code base.

There are a number of great Drupal 9 resources from the Drupal community at large. Here are a few you might want to check out.

How Drupal 9 is made and what is included (Drupal.org) -- This guide includes documentation about the code deprecation process, 3rd-party library changes, module removals, environment requirements, and other important information about Drupal 9 and its future development.

A heartfelt thank you to all the contributors who made Drupal 9 happen! And a thank you to the Drupal Association for supporting community infrastructure and events that keep Drupal moving forward.