Blake and I recently started the process of planning, and preparing, to migrate Drupalize.Me to Drupal 8 9. The primary component of our evolving infrastructure is a Drupal 8 site. With Drupal 9 right around the corner I wanted to know what it would take for us to upgrade that application.

Part of figuring that out is assessing all of our custom module and theme code to make sure it's compatible. Which, mostly means making sure we're not using an deprecated APIs. Drupal 9's API will be the same as Drupal 8.9's API with the deprecated code removed. If you remove any use of deprecated features, and your module still works on Drupal 8 it'll work on Drupal 9, too. 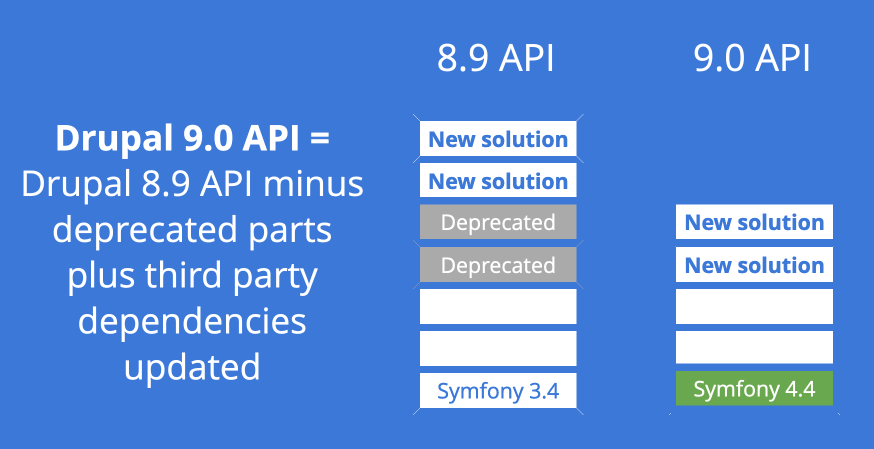 Slide from State of Drupal 9 by Gabor Hojtsy.

To start figuring out what we need to change, and what it's going to take, I've been playing around with two helpful tools that I've been hearing a lot about lately:

What is Drupal Check?

Drupal Check can scan for use of @deprecated code and suggest a fix, as well as optionally perform static analysis. This makes it easier to locate the parts of your codebase that will need to be updated in order ensure Drupal 9 compatibility.

Install drupal-check in an existing project as a development dependency using Composer:

Note: Drupal Check needs to be run from the root directory of a Drupal project in order to work.

Use this command to verify the install worked and view available options:

Here's an example of running drupal-check against a specific module (lehub is our custom module):

What is Drupal Rector?

About a month ago I posted on Twitter asking what people were interested in learning about in preparation for Drupal 9.

What do you want @drupalizeme to cover over the next few months that'll help you prepare for Drupal 9? pic.twitter.com/UQK9pa2Dvh

And one of the things I learned about was the Drupal Rector project from Offer Shaal (@shaal), and others. So I decided to give it a try. You can find the code here https://github.com/palantirnet/drupal-rector.

Rector is a PHP project that given another PHP codebase can apply a set of rules that refactor the PHP and output an updated codebase. A simple example would be renaming a class, and finding all the places in the codebase where the class is used and updating those as well. A more complex example would be automating the update from PHP 5.3 to PHP 7.3.

Either way, it's a great way to get a jump-start on ensuring your custom Drupal modules are Drupal 9 ready.

Note: Using drupal-rector can cause changes to your codebase. I recommend you do this in a Git branch so you can easily view a diff of the changes, and revert anything that doesn't work.

And ... Running drupal-rector requires a minimum of PHP version 7.2. I initially tried using PHP 7.1 and got some cryptic errors related to PHP autoloading. Switching to a newer version solved the problem.

Create a rector.yml configuration file. I created this in the root directory of my Drupal project, alongside the vendor/ and web/ directories. My codebase looks like this:

Here's an example rector.yml file. You'll want to adjust the path to the drupal-8-all-deprecations.yml, and Drupal code directories like web/core to make sure they match your project's layout. These paths should be relative to the rector.yml file.

This tells the rector PHP application to use the rules contained in the drupal-rector project, where to look for your project's code for referencing, and what file extensions (in addition to .php) it should operate on.

Now you can execute drupal-rector with:

And it'll output examples of all the changes that would be made if you ran it without the --dry-run command.

If you're happy with what you see, go ahead and remove the --dry-run flag and let 'er rip.

What about a UI?

Prefer a UI solution instead of the CLI? Gabor has a great video showing how to use the Upgrade Rector module to produce a diff via Drupal's UI.

One thing I noticed when running drupal-rector is that in some cases while the suggested fix would technically work, it's maybe not the technically correct approach. The resulting code will work. And in many cases working is good enough. However, this might also be a good time to revisit this custom code and verify that in addition to removing use of deprecated features we're also using current best practices.

Take the above example for instance which suggests replacing calls to db_select() with \Drupal::database()->select(). This doesn't account for the fact that this code exists as part of a custom service definition. And the more technically-correct approach in this case would be to pass the database service to the LehubConfigOverrider service via an argument in lehub.services.yml.

In the little that I've used drupal-rector thus far the place where I've seen this opportunity for refactoring come up the most is when replacing calls to deprecated functions like db_select() or drupal_set_message() with calls to \Drupal::* convenience methods in scenarios where dependency injection should be used instead.

Both drupal-check, and drupal-rector, are useful tools to add to your toolkit. Especially when it comes to starting the work of ensuring your Drupal 8 code is compatible with Drupal 9. They can't do everything for you, but what you'll end up with is a comprehensive list of updates you'll need to make, and a sizeable head start in doing so.

Upgrade Status is built on top of the internals of drupal-check and includes a whole lot more checks, like twig deprecation checking, hook_theme uses and definitions, deprecated Drupal library uses and extension, info file checking, composer.json checking, etc. It also has drush commands. It does sit into your site as a module, which you can avoid with drupal-check, but most addon checks do require a bootstrapped Drupal, so that cannot be avoided.

Rector seems to have changed, and requires a rector.php file instead of a rector.yml file.

You can learn about that in the README on the drupal-rector project on github.